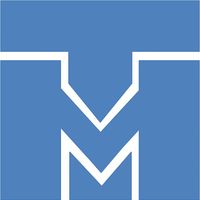 This is the page of a project related to project "Fencing".

The main aim of this project is development of a program which will be useful for recording and calculation of manipulator's movement.

Current task is development of fencer's hand model. That means to create mathematical model, that finds the position of a hand and comes to this position from any previous position with visualization on C# language, using parameters (changes of angles in joints and coordinates of a shoulder) 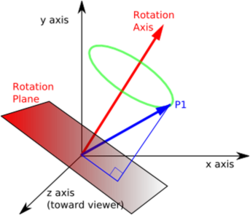 In order to rotate any 3D object we should rotate related vector.
But how to rotate vector?
This programm uses quaternions for vector rotation. 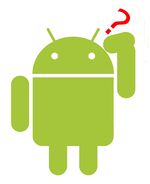 In order to rotate the vector [math]r[/math] we need to go through the following steps:
1) Cast vector to quaternion It's easy to make quaternion of vector. Just add zero to the scalar part and your vector to the vector part of quaternion
[math]R = [0,r][/math]
2) Multiply
[math]R' = Q R Q^{-1}[/math]
Now we have quaternion [math]R[/math] rotated.
3)Cast back After all we should cast quaternion [math]R'[/math] to vector [math]r'[/math]. It's as easy as first cast, just forget about scalar part. Vector part of [math]R'[/math] is ours [math]r'[/math] vector.

OK! We already can rotate any vector around any on any angle (but not bigger than 180deg)!
But it's not enough. We want to get motion and it should be smooth. So we need to go through many points between each position. There is a problem that appears if we try to rotate vector around two axis at the same time. Rotations are not additive, so we can't just rotate on a small angle each step. The solution is simple, we need to rotate vector on bigger angle on each step from the initial position.

About program interface in C#[править]

Because program doesn't have help yet, I should give some information about it's interface.
I'll tell about each tab:

This one is responsible for customization of model appearance. You can change model color and opacity, quality and speed of basis rotation.

“The Windows Presentation Foundation is Microsoft’s next generation UI framework to create applications with a rich user experience. It is part of the .NET framework 3.0 and higher. WPF combines application UIs, 2D graphics, 3D graphics, documents and multimedia into one single framework. Its vector based rendering engine uses hardware acceleration of modern graphic cards. This makes the UI faster, scalable and resolution independent. etc.”

Drawing of objects is done by triangulation, that means that we need to build it of triangles. Notice that back side of triangles is transparent as default.

The number of Linux OS users is increasing so I came to idea of making this program portable for this OS. But I faced an immense problem: Wine & mono doesn't support WPF graphics. That were really bad news, which meant that I wont be able to run this program on Linux. And finally after scrolling about some hundred pages I thought: "I can't port C# program with WPF to Linux, but I want it to work there, so Let's rewrite it in C++ with QT and OpenGL!" This idea is crazy enough to be good i think.

The first thing I should do was to find a good cross-platform IDE which I will use, because I don't like compiling project from the terminal. Finally I installed QT Creator IDE and started studying it, by the way trying to writing something that resembles program interface...

Maybe this can be used[править]

This program in future can be used as a package for modelling manipulators. They are very similar to hand, so the idea is the same.

First run of the program may ask you to create file with default settings, just click 'OK' and it'll run